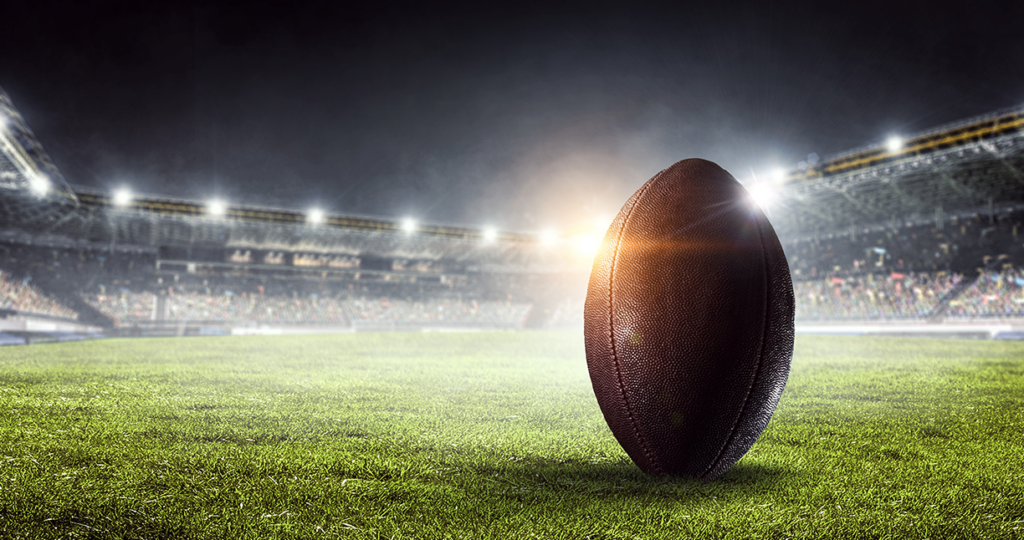 The Red Hawks put an exclamation point on the end of a terrific season with an invitation to the PopWarner Super Bowl played in Orlando Florida earlier this month. After already claiming the 10 and under Central Connecticut Pop Warner Regional Championship back in November the team from Manchester would head south to take on the toughest competition of the year as they matched up against teams from up and down the east coast for a chance to call themselves Pop Warner Super Bowl Champs!

The road to any championship season is an unpredictable one, and even at the highest levels of competition teams are tested with unexpected injuries, adverse weather, and unforeseen circumstances. Well in the world of local Pop Warner football the same is true, and in addition to the unpredictability of a long season, the same rules that make the game great such as age based divisional play which allow for a three year span across the 10 and under division make it so that teams look very different from season to season.

Not unlike their HS counterparts, players and coaches of the local Red Hawks Pop Warner team are up against the odds when it comes to fielding a championship-caliber team. The constant turnover of players aging into and out of the program, competition from other sports, and off-the-field priorities make keeping up team continuity and chemistry a difficult task indeed. So, more often than not the opportunity to capitalize on the magic that surrounds a special group is fleeting, and a single season might be the only shot you get.

For the Red Hawks coaching staff, it’s all a balancing act between setting realistic expectations for the young people they lead and recognizing when a team might have the indefinable “It” that can take a season from memorable to unforgettable.

For Calvin Harris, one of the nine dads coaching the team, the approach to the start of the season was conservative, but the staff knew that there could be an opportunity to really string some wins together with a number of returning players having been together the previous season.

“So I think that the expectation for the start of the season was pretty simple, just put everyone in a position where we can best showcase the talent of the team and demonstrate as a united front.”

“But I’m not gonna lie to you, we all knew that there was a chance that in this division with this team, we could win the conference and have a real opportunity to win the regional after that.” 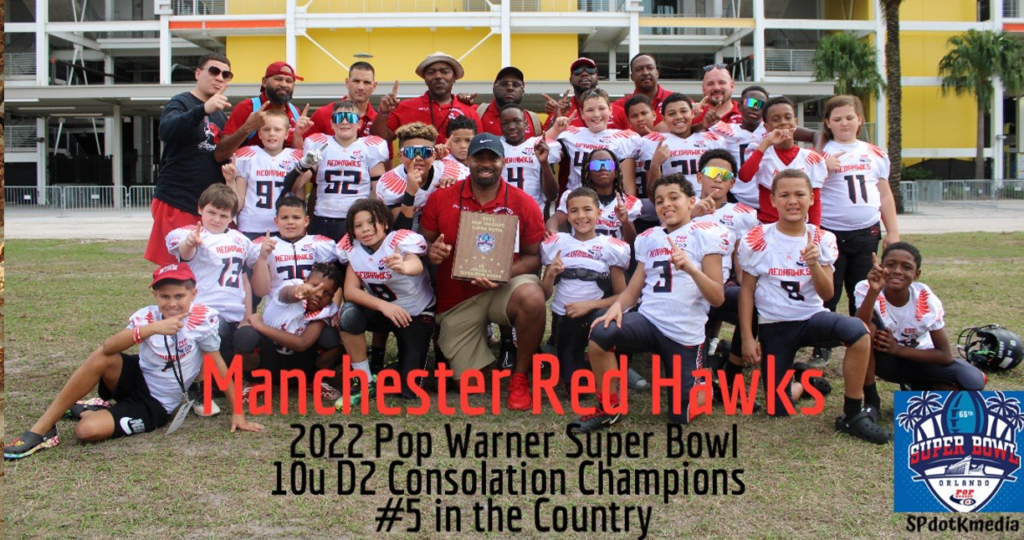 The team would get off to a quick start and end up with an impressive 9-1 divisional record, strong enough to earn them the Central Connecticut Divisional Title and earn them a chance to compete for the title of Regional Champions.

In front of an anxious crowd at New Milford High School, Manchester met with the “Hounds” of Naugatuck, where with a decisive victory the Red Hawks simply outmatched their opponent and punched a ticket to the national tournament. With this win secured, the Red Hawks’s trip to Orlando Florida, and a first-round match-up with a team from Addision, Illinois in the Pop Warner National Championships was the next task at hand.

While internally, expectations for the 10U team were high no team has an easy route to the Pop Warner National Championships. After finishing off their regular season atop both their division and regional opponents the Red Hawks would have to see how their skills matched up against opponents from across the country.

Every year only 72 teams from the hundreds of local teams spread across eight different national regions get the chance to play for a title in Florida. In the first round, the team from Manchester would match up with the Cowboys of Addison, Illinois, the team that would eventually go on to the championship game losing only to the eventual champions from Oakleaf Florida.

While the true grit and non-stop attack of the Manchester Red Hawks had carried them through the New England Regionals and to an incredible record of 12-1 ahead of tournament play, the pace of the Cowboys offense proved to be just too much for the Red Hawks to compete with.

The opportunity to participate in a major tournament was truly an exclamation point on an already terrific season, sweetened even more by the fact that for many the season took on a meaning that was bigger than football. “Midway through the season there was just a real family-oriented feel and atmosphere around practice and at the games” remembers Calvin Harris.

“By the time  Florida was in the mix, forget about it. We had a number of kids on the team who have never left Connecticut, so just to see the excitement and the smiles from the airport and arriving at the hotel, before we even got on a football field it was just priceless.”

So while the local champs did not return from this particular trip with the biggest trophy they have undoubtedly set a high bar for both future Red Hawks teams as well as the local competition. While it is unlikely that the full roster of 21 players will be together again next season, each of them now has a new opportunity to take that positive experience and share it with new teammates and to drive and influence new passions on and off the field.

For those players who might be aging out of the 10U team after this remarkable season, a return trip back to Florida in 2023 might not be far off either. After all, the Red Hawks 12U team ended their 2022 campaign as Central Connecticut Division Champs and there appears to be no shortage of talent coming up the line. So keep an eye on the box scores this fall, and keep a seat warm for the Red Hawks down in Orlando next winter.