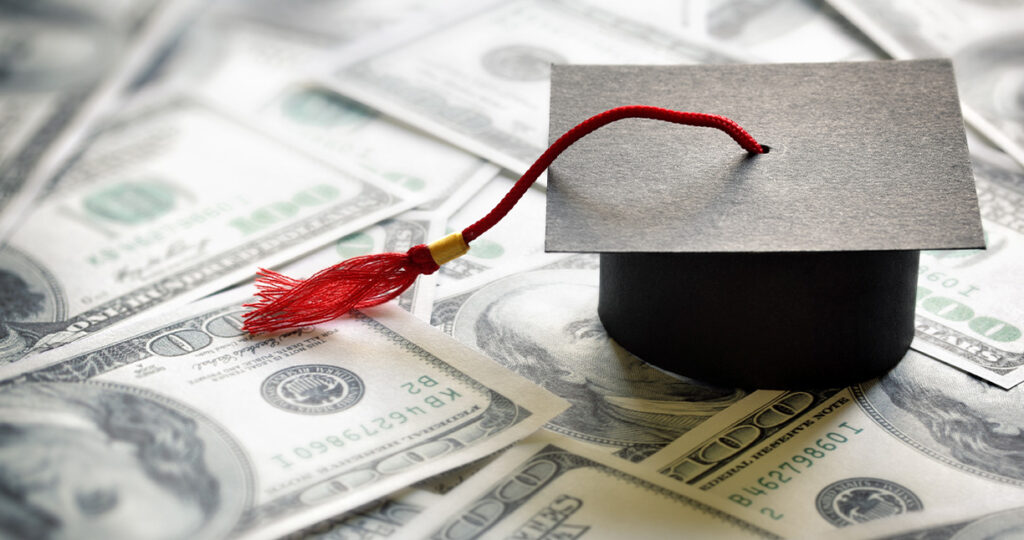 Is there such a thing as good debt? If so, is student loan debt considered good? It’s a term that has often been applied to the nearly $1.6 trillion in accumulated student debt held by approximately 45 million Americans. The numbers have grown dramatically over the last 50 years with the unprecedented rise in the cost of higher education, costs which will continue to increase at a rate that will put a traditional four-year education out of reach for many.

It is true that student educational loans are generally provided at a much lower interest rate than other loans, and there’s at least somewhat of an expectation that the investment will lead to an increased opportunity at securing a career that maximizes your earning potential. The issues become more readily apparent for those who inevitably get caught up in the cycle of inflation outpacing earnings, in turn compounding the weight of student loan debt on borrowers.

For most borrowers, the recommendation is to not exceed more than 10% and certainly not more than 15% of a debt-to-income ratio. For example, the borrower would not expend more than 10% of their monthly gross income (determined by dividing gross annual income by 12) on student loan repayment. That is for a borrower holding $30,000 of student loan debt with an annual income of $50,000 would want to make sure that their corresponding payment would be somewhere in between $416 – $625 per month.

But for many of the more than 45 million borrowers in the United States, monthly payments exceeding 15% are becoming the norm. Since 2009, the rate of growth for student loan debt has outpaced the growth of salaries by a staggering amount. According to the U.S. Census Bureau and U.S. Department of Education, the median family income in the United States grew from $49,777 to $67,521 while the average student loan debt balance showed a dramatic increase from $20,560 – $39,381 over the same amount of time.

With all of this in mind, it makes sense then that so many individual borrowers and their families have been awaiting some sort of debt relief. For many, the wait has coincided with the seemingly never-ending campaign season with as much of a focus on campaign promises (including a solution to student loan debt) as on the candidates themselves.

Now a central and unavoidable topic for every would-be holder of public office, the student debt crisis has in the last two and half years taken on a life all its own. With the federal government effectively putting a pause on all federal loan payments at the start of March 2020 and all voluntary payments made accruing 0% interest during that time, borrowers have largely been split into two different camps. Those that have continued making payments, and those that for one reason or another have taken advantage of the grace period and forgone payments altogether.

Regardless of the situation borrowers find themselves in, recent developments in the Biden-Harris Administration’s Student Loan Debt Relief Plan have seemingly opened the door for many to see a much-needed reprieve from the burden of mounting student loan debt. With the announcement that individual borrowers may be entitled to up to $20,000 in loan forgiveness (dependent on the type of federal loans held), many are anxiously awaiting details on the application process.

While at this point in time, many questions are still without answers from the federal government, one thing is for certain. The student loan repayment “pause,” which has been in effect since the spring of 2020, has been extended for the last time and is scheduled to expire on December 31st, 2022. At this point, all federally held student loans will again be collected at the monthly rate previously established in the borrower agreements.

Many reports suggest that as many as 60% of borrowers with federal student loans made zero payments during the loan pause between March 2020 and August 2022. This trend has the potential to set up a  jarring start to the new year for the estimated 27 million loan holders who have not made a payment in nearly 2.5 years. Enter the Biden, Harris Student Debt Relief Plans signature item.

The plan announced in August of 2022 highlighted a three-point approach to transitioning borrowers back into regular payments with the start of the new calendar year. The first part of the plan is the previously discussed automatic extension of the interest-free repayment pause, which will continue through the end of the year. However, the most highly anticipated action item is the complete cancellation of up to $20,000 of federal student loan debt.

One of the most recent hot-button issues for young borrowers (and subsequently young voters) has been the demand for legislation that provides meaningful relief that helps borrowers get out from under debt that for many has made it next to impossible to build lines of credit, or access affordable mortgages putting the dream of home ownership out of reach for millions.

While the $20,000 figure proposed in the Biden-Harris Student Debt Relief Plan would undoubtedly be a welcome reprieve for many, the details on who qualifies for debt cancelation and for how much have been a little less clear, and as of the writing of this article have even evolved since the plan was first announced in August.

As we anticipate more information in the coming week, here are some of the most important points for Federal Loan Borrowers to know moving into the fall.

Some borrowers will receive up to $20,000 dollars in debt cancellation, but not all.

Borrowers who received Pell Grants, which are generally reserved for undergraduate students who have not yet received a bachelor’s degree and display a significant need for financial assistance, are eligible for loan cancellation up to but not exceeding the amount of $20,000.

The majority of the nearly 43 million federal student loan holders who are not recipients of the aforementioned Pell Grants are eligible for up to but not exceeding $10,000 of debt cancellation. In both instances, it is important to note that the debt cancellation is capped at the amount of your total outstanding debt. So, if you are eligible for $20,000 in debt relief but only hold $15,000 of outstanding debt, your relief would only be in the amount of $15,000.

Most borrowers will need to submit an application to be eligible.

Those borrowers who may qualify under the existing Public Service Loan Forgiveness program will automatically have their debt canceled when the plan goes into effect. However, most borrowers who will qualify for the debt cancelation plan will be required to complete and submit an application.

While a specific date has not yet been identified, the Biden-Harris Administration along with the Department of Education have stated that applications will become available in early October. Both the current administration as well as the DOE have encouraged individual borrowers to sign up for notifications at the Department of Education subscription page, or through their private loan carriers (such as Navient, and Nelnet) as well as by making sure that all account information is up to date on the federal loan portal at studentaid.gov.

There are limitations to who qualifies.

Borrowers who are eligible for debt cancellation are limited to those who have an individual yearly income that is less than $125,000 or a household income of less than $250,000.

Recent amendments to the debt relief plan have meant that borrowers who hold specific Perkins and Federal Family Education Loans will not be eligible for debt cancellation. While some 4 million borrowers are estimated to hold these types of loans, the administration has stated that they expect the change to affect less than a quarter of the total loan holders.

The deadline for borrowers to consolidate these loans into direct loans that would be eligible for the one-time debt cancellation was September 29th, 2022.

The timeline for the application isn’t clear, but there is a deadline to submit it.

While applications have not yet been made available to the public, a couple of important dates have been set for would-be benefactors of the debt cancellation program.

At the time of this publication, the application for the debt cancelation plan has not yet been made available. While the public awaits further information on how to start the application process, the recommendation is that prospective applicants complete and submit paperwork by November 15th, 2022, in order to ensure that their information is up to date ahead of the application deadline.

While waiting on an application, borrowers should be aware that the deadline for applications to be submitted to the Department of Education has already been established as December 31st, 2022. Applications received after the deadline will not be considered for the one-time debt cancellation as outlined in the current Debt Relief Plan.

The plan as currently written would also take into account payment schedules after the one-time debt cancelation is complete. The current administration has proposed a myriad of interventions to make future payments more manageable for both continuing and future borrowers. Some of what is included in the plan can be seen below.

To continue to follow developments on the ongoing debt cancellation plan readers and borrowers should be sure to sign up and make sure information is up to date through both the Department of Education at studentaid.gov and through any private loan managers.