REC on the Run brings JENGA to Northwest Park 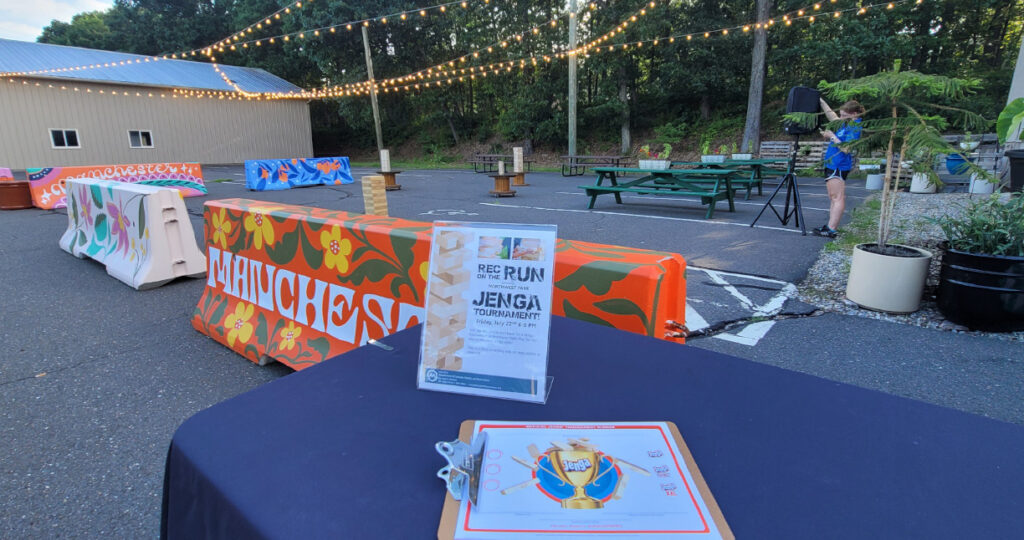 It is the little things that at times spark the best ideas. A box of little wooden blocks and a bit of competitive energy just outside the doors of The Tiny Gallery @ Northwest Park, REC on the Run stopped in for a friendly JENGA Tournament on July 22.  After traveling the parks each week, it was clear that JENGA has no age restrictions and has become a universal game that cannot be resisted when those towers of blocks are neatly arranged rising up to the sky.

Observing that there was an opportunity to POP-UP a mini tournament, a resounding “Let’s just do it!” was shouted out by the staff of the REC on the Run team. Under the Market lights located over The Tiny Square Northwest Park Jenga Tournament was launched. Social media and word of mouth recruited families to come on out and test their skills – how high will the tower go and who will make it come tumbling down?

The arena was set- four sizes of JENGA stacked and ready for the novice, the intermediate, and the expert. Would anyone accept the challenge to have some friendly fun on a beautiful summer evening in the park?

Ready, set, go live on Facebook – Rec on the Run Leader Kate and Tiny Teddy made the announcement that REC on the Run is on-site and ready for some JENGA. What if no one shows up, there was no pre-registration, no signup, no entry fee – a few minutes passed and all was quiet.. The first group of people in the park were so excited to see JENGA, then it all came together as families came from all directions and claimed a spot in the JENGA arena.

What started as a random idea will now become a larger tournament this fall – stay tuned and practice your stacking skills – JENGA is coming to a location near you!

Design, color, and all things creative are my passion. Through the lens of my Nikon, I see what others neglect and collect moments that pass way too fast. The world is my canvas and the sands of a beach
capture my heart.