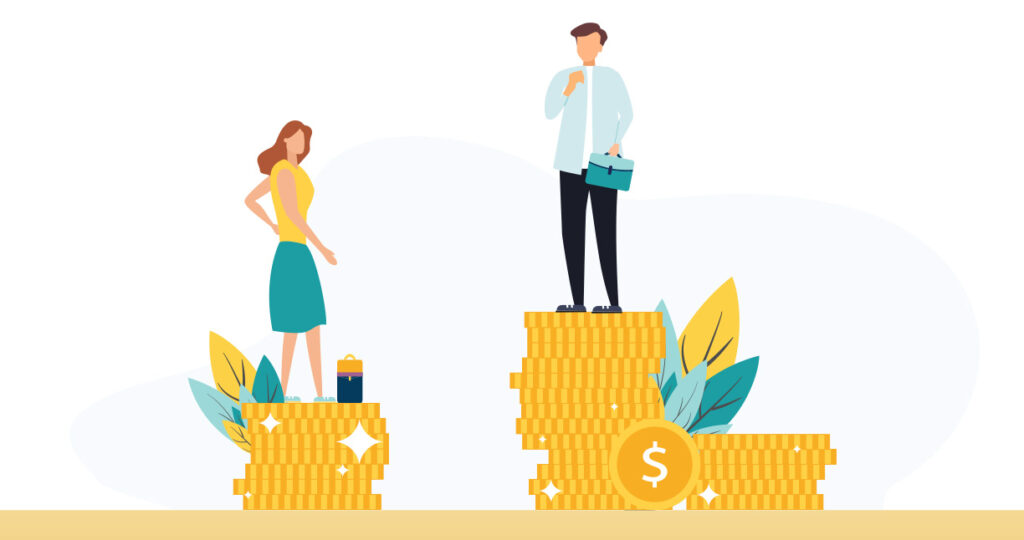 On March 15, Equal Pay Day was observed in the United States, a day meant to raise awareness of the gap in pay between men and women in this country. Begun by the National Committee on Pay Equity in 1996, the changing date “symbolizes how far into the year women must work to earn what men earned in the previous year.”

To commemorate this year’s Equal Pay Day, President Biden issued a proclamation, stating, “Equal pay is a matter of justice, fairness, and dignity—it is about living up to our values and who we are as a Nation.”

“This year, Equal Pay Day falls on March 15, the earliest we have ever marked the occasion. The earlier that Equal Pay Day arrives, the closer our Nation has come to achieving pay fairness,” the proclamation continues. “But while we should celebrate the progress we have made, as I have said in the past, we should not be satisfied until Equal Pay Day is no longer necessary at all.”

According to the Pew Research Center, progress in eliminating the gender pay gap has slowed, with the gap remaining relatively unchanged for 15 years. Their most recent report states, “In 2020, women earned 84% of what men earned, according to a Pew Research Center analysis of median hourly earnings of both full- and part-time workers. Based on this estimate, it would take an extra 42 days of work for women to earn what men did in 2020.”

Gains made in past decades have come in areas more easily measured, according to the report, as women have increased educational attainment, found increasingly diverse employment opportunities in previously male-dominated sectors, and had greater work experience. But even with these gains, true gender pay equity has remained elusive.

“Even though women have increased their presence in higher-paying jobs traditionally dominated by men, such as professional and managerial positions, women as a whole continued to be overrepresented in lower-paying occupations relative to their share of the workforce,” the report states.

Meanwhile, motherhood presents problems to women in their careers, the Pew report states. Mothers with children under 18 were more likely to say they, “needed to reduce their work hours, felt like they couldn’t give full effort at work, and turned down a promotion because they were balancing work and parenting responsibilities,” compared with fathers. Further, around 20 percent of mothers said they had been passed over for assignments or promotions, while 27 percent said they have been treated as less committed to their work.

The professional and financial impact on mothers in the workforce has sometimes been dubbed the “motherhood penalty.,” and is in part due to the lack of affordable child care. According to the Center for American Progress (CAP), “Child care challenges have become a barrier to work, especially for mothers, who disproportionately take on unpaid caregiving responsibilities when their family cannot find or afford child care…Too often, mothers must make job decisions based on child care considerations rather than in the interest of their financial situation or career goals.”

Their survey found that if there was more access to affordable childcare, mothers said they “would increase their earnings progress in their careers by finding a higher-paying job, applying for a promotion, seeking more hours at work, or finding a job in the first place.”

Along with providing affordable and high-quality childcare, CAP believes that raising the minimum wage and raising the tipped minimum wage would help women, especially women of color, overrepresented in lower-paying industries. Supporting fair scheduling practices would allow mothers flexibility in their schedules for family needs without fear of losing their jobs, and pay transparency would give women knowledge of pay discrimination between themselves and their male colleagues. Paid sick days legislation and paid family and medical leave insurance would support mothers and caregivers in the workforce from losing income due to children or family issues, with CAP noting that the United States remains the only developed country that does not guarantee women paid maternity leave.

Parts of the problem remain harder still to measure quantitatively. Another Pew Research Center analysis of the gender pay gap posed several questions about factors that aid career and pay advancement behind the scenes and that remain without a definitive answer.

“How much is due to gender stereotypes that contribute to lower aspirations before they even reach the job market?” the report reads. “Or is it due to weaker professional networks once they look for work? Do women lose out because they do not push as hard as men for raises and promotions? And what is the role of discrimination, which turns up in experiments where people are asked to rate identical resumes from mothers and fathers?”

There are signs of progress, but a large amount of work remains to be done. In March, a new report from the Pew Research Center based on Census data found that women working full-time under the age of 30 earned as much as or slightly more than men in 22 of 250 metropolitan areas, including New York, Washington D.C., and Los Angeles metropolitan areas. The pay gap is smaller for younger women, but as they advance into their careers those stumbling blocks to pay equity remain.

According to The Washington Post, “Men and women start more or less on an even footing but wage disparities widen over time, according to economists who study gender compensation. Small pay differentials are magnified as raises and promotions stack up over years and decades.”

Over the course of a lifetime, this gap causes women to lose out on a significant amount of income, impacting them and their families for years to come. With women joining the workforce in increasingly large numbers since the middle of the last century, there are already too many wages and income lost for women and their families. In the decades since, the gap has measurably shortened—but women remain behind men in their earnings with women of color the most affected. There is still much more to be done.