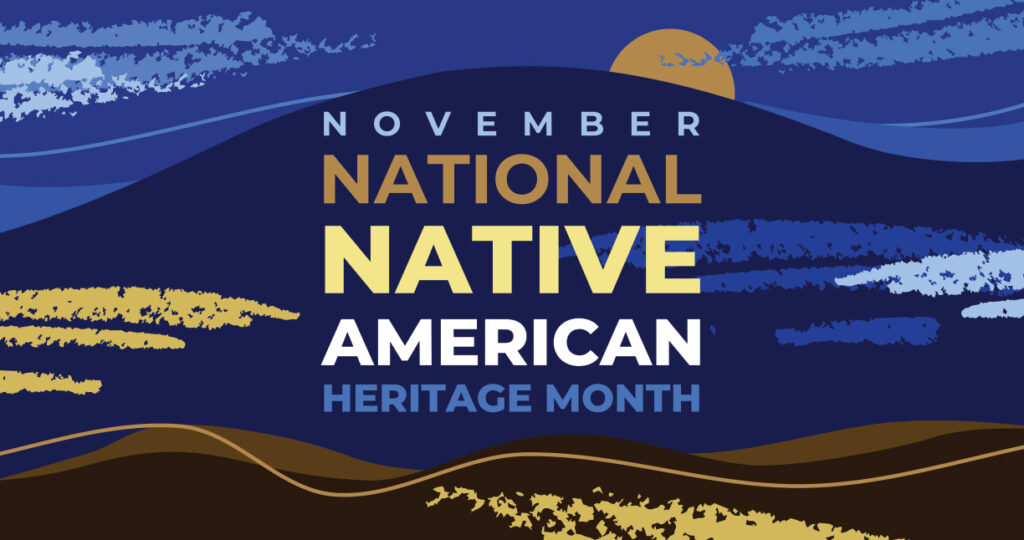 On October 29, President Biden proclaimed November to be Native American Heritage Month, a time to celebrate Native American & Indigenous history and culture. Across the country, people will be celebrating the rich cultural heritage of one of America’s most marginalized communities.

“Despite a painful history marked by unjust Federal policies of assimilation and termination, American Indian and Alaska Native peoples have persevered.,” the Proclamation states. “During National Native American Heritage Month, we celebrate the countless contributions of Native peoples past and present, honor the influence they have had on the advancement of our nation, and recommit ourselves to upholding trust and treaty responsibilities, strengthening Tribal sovereignty, and advancing Tribal self-determination.”

November was first designated as the month to celebrate Native American heritage in 1990 when George H.W. Bush approved a joint resolution. Since 1994, proclamations have seen every November designated to commemorate Native American heritage. Efforts to get national recognition of the history and heritage of Native Americans have been going on for far longer than that. In 1915, Red Fox James of the Blackfoot tribe rode horseback through several states seeking state government approval for a day to be set aside to celebrate Native Americans. He presented 24 state endorsements to the White House on December 14th. Although no action was taken, in 1916 New York became the first state to set aside such a day on the second Saturday of May.

This month honoring Native Americans also comes after Indigenous People’s Day was celebrated on October 11th, with President Biden also issuing the first presidential proclamation of Indigenous People’s Day. Sharing the same day as Columbus Day, the holiday is meant to refocus attention from the ‘discoverers’ of America to the communities that have lived there for thousands of years. In addition, the day after Thanksgiving is also designated to be Native American Heritage Day.

“Native American roots are deeply embedded in this land—a homeland loved, nurtured, strengthened, and fought for with honor and conviction,” the Proclamation continues. “This month and every month, we honor the precious, strong, and enduring cultures and contributions of all Native Americans and recommit ourselves to fulfilling the full promise of our Nation together.”

The population of Native Americans in the United States has been increasing in recent years as shown in the latest census. According to CNN, 9.7 million people—around 2.95% of the population—identified wholly or partly as Native American or Alaska Native, up from 5.2 million in 2010. The true number is likely higher, with difficulties in accurately counting those on reservations, of which there are many. Today, there are approximately 326 federal reservations, consisting of 56.2 million acres, posing a challenge to accurate accounting.

The original inhabitants of what is now Manchester were the Podunk people, who had trails and encampments in the town. According to the Manchester Historical Society, the name of the Hockanum River which flows through the town comes from the Algonquian word Hocquaun, meaning “hook-shaped or crooked river.” The Podunk, like other tribes in the region, faced enslavement, war, and being pushed off their land. The tribe no longer exists, its remaining members possibly assimilating into other tribes in the region long ago. The History of Manchester Connecticut, written by local historians Mathias Spiess and Percy W. Bidwell in 1924, contains sections on the Podunk people as well as the locations of their trails and settlements in the town. This can be found on the Historical Society’s website.

That history, and the history of all Native Americans, has often been overlooked, as has their contributions to the country and the world. But as Rodney Bordeaux, president of the Rosebud Sioux Tribe in South Dakota, wrote in an opinion piece for The Washington Post, “Native American history is American history.”

Bordeaux further cited the influence of the Iroquois Confederacy government on the Founding Fathers and the fact that Native Americans have served in the military at the highest rate of all other groups. Notable figures include Ely Parker, who wrote out the terms of surrender for Robert E. Lee’s Confederate army at Appomattox and Ira Hayes, who raised the flag at Iwo Jima in one of the most iconic photos in American history, as well as the Native American code talkers who served in both world wars.

The month is not just for celebration, however. According to the National Congress of American Indians, “Heritage Month is also an opportune time to educate the general public about tribes, to raise general awareness about the unique challenges Native people have faced both historically and in the present, and the ways in which tribal citizens have worked to conquer these challenges.”

Native Americans continue to face sharp inequalities in the United States as a result of historic and longstanding discrimination. According to the Indian Health Service, a government agency designed to give healthcare access to Native Americans, Native Americans and Alaska Natives have a life expectancy of 5.5 years less than the national average. They note that “lower life expectancy and the disproportionate disease burden exist perhaps because of inadequate education, disproportionate, poverty, discrimination in the delivery of health services, and cultural differences. These are the broad quality of life issues rooted in economic adversity and poor social conditions.”

It is for these reasons that the Proclamation states: “Far too often in our founding era and in the centuries since, the promise of our Nation has been denied to Native Americans who have lived on this land since time immemorial.”

Here in Manchester, Native American Heritage Month will be commemorated with a Perspectives in Righting Film Discussion on Songs My Brother Taught Me, a drama film set in the Pine Ridge Indian Reservation in South Dakota that touches on many issues Native American communities face. The event will be held December 10th at 6:30 at the Cultures Labs at Mahoney Center and will consist of a film screening followed by a moderator-led discussion.