The recently painted ‘Birthing a Legacy’ Mural at Manchester’s Mahoney Center has been catching the attention of people across the state. On this past Martin Luther King Jr. Day, news stations flocked to see the beautiful, complete mural after a weekend of hard work and late nights by artist Ben Keller. On the Thursday before the national holiday, Executive Director of CT Murals Matt Conway approached the Department of Leisure, Family, and Recreation in search for a home for the mural in time for MLK Day. The artwork was covered under a recent grant received by CT Murals, a project of the nonprofit RiseUP For the Arts. The organization is a collaboration of artists, community members, enterprises, and volunteers producing both private and public art projects across the state.

“CT Murals is an important project because we bring help to positively transform environments through public art. Art is such a powerful tool to open hearts, inspire others, or simply make a neighborhood more beautiful. Our public art is community inclusive and accessible to anyone,” said Conway.

"Our public art is community inclusive and accessible to anyone."

Within 48 hours, the project was underway and Ben Keller began creating the mural on the brick wall of Mahoney Center, which will soon be home to fitness as well as creative arts Leisure Labs, meeting spaces for grassroots community groups, the Culture Center, and People’s Gallery. Now, the exterior of building will reflect the art and coming together of the community that will take place in the interior.

This is what convinced Ben, a young professional painter/mural artist who launched his own business in 2018, that Mahoney Center was the perfect spot for the MLK mural. Ben started painting at the age of 12 and hasn’t put down the brush since. His work can be seen across the state of Connecticut ranging from brick facades in Norwalk, restaurants in New Haven & Fairfield, to back alleys in Willimantic where he is based. Check out his Instagram or website to see many of his other impressive creations. Ben’s style of work is best described as realistic expressionism or industrial romanticism. For his interior & exterior based murals Ben works primarily with spray paint and bucket paint. 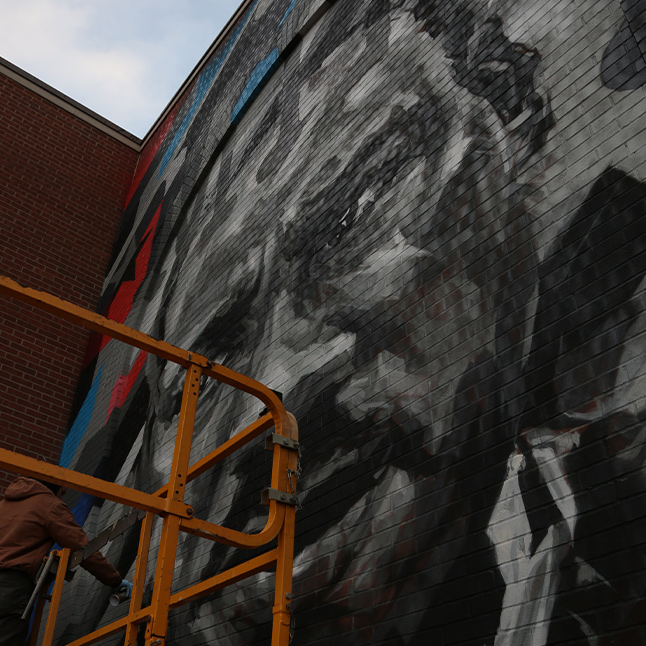 According to Ben, the ’Birthing a Legacy’ Mural is meant to be a “symbol of strength and hope for the community and surrounding neighborhoods, a new beginning from the past year, a memorial to MLK, and a destination for people to visit and enjoy.” He hopes the piece will inspire those who feel called to leadership.

The mural is not only artistically impressive and visually impactful, but it brings great meaning and significance to the local Manchester community. “The MLK Mural will be a symbol of light and an everyday reminder to the Manchester community that love wins,” said Conway. “Hearing of the inspiration it has already brought to the families in neighborhood that have visited the mural is what these projects are all about. Inspiring the community.” This is the true importance of mural work such as the ‘Birthing a Legacy’ piece. Many members of the Manchester community have expressed how the mural has provoked emotion and reflection.

Town Director Pamela Floyd-Cranford explained how the mural was an emotional and almost spiritual experience for her. “I’ve been living in Manchester for 35 years and never in my wildest imagination could I see this happening. Martin Luther King was more than just a symbol of freedom, civil rights, and the call for justice and liberty in America. He was a symbol of love, compassion, and caring for all fellow humans. The MLK mural symbolizes that our town is truly becoming a town that is striving to be inclusive and now hopefully will embrace all of our residents,” said Director Floyd-Cranford.

Recreation Senior Supervisor Calvin Harris also commented on how the mural stirred him and prompted reflection on his role in the movement for racial justice. “Turning the corner yesterday on MLK day and seeing this iconic figure plastered on the outside wall of the Mahoney building brought me to tears. I was overjoyed and extremely happy to be Black and know I am a part of the solution that is taking place,” explained Harris. In speaking with folks in the neighborhood, he was happy to hear overwhelming approval for the mural and to already see how the mural inspires people to “do better, be better.” Harris’s son and local elementary school student, Camden Harris, was asked of his thoughts when he first saw the mural. “I felt like he was a hard worker… I felt happy and proud, like I could be him,” he responded.

Diane Kearney, Director of Equity and Adult Education, expressed a similar sentiment in reaction to the mural. “I felt a sense of validation. And I felt respect for the people of color within this community. I can tell that it was done with such professionalism and thought. It makes me proud to live in this community,” she said. The mural symbolizes hope, resilience, and determination for Kearney.

“I felt a sense of validation... I can tell that it was done with such professionalism and thought. It makes me proud to live in this community."

In the short amount of time since its creation, the mural has inspired a diverse range of community members to reflect and take action. Clearly, art is powerful. After seeing the impact of the recent mural, some are calling for additional murals and public art throughout town. “The Town should support and fully promote public art. Many of our buildings could use the positive facelift,” said Director Floyd-Cranford. Public art is visually-pleasing and can demonstrate community values, drawing new and diverse people and businesses to town.

“Talking and meeting about the fight against racism is great, but SEEING is believing. When you display and support iconic figures (game changers), it proves our dedication to the fight,” said Harris. The newest MLK mural is doing just that. It has already drawn people from all parts of town and even outside of Manchester to the West Side neighborhood to see the face of Martin Luther King Jr. 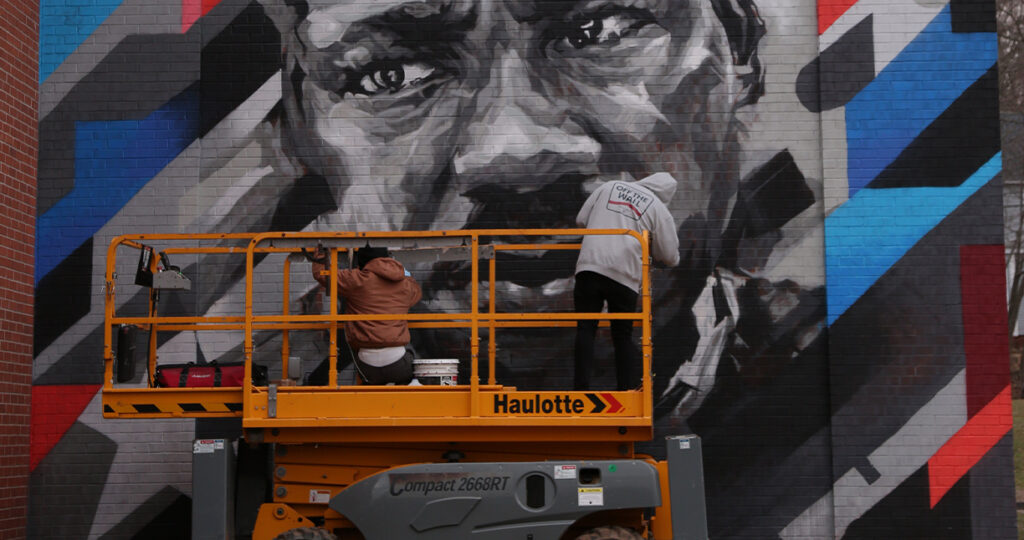 “It will be an added bridge to bring Manchester citizens to a place to intersect and converse. It is monumental that MLK faces the park. Children who plat on the playscape or play basketball can look up and see the face of a man who changed America,” said Director Floyd-Cranford. “I hope it brings about a conversation of who he was and what he stood for in the cause for civil rights. I hope it makes people reflect on the core of their spirits to see if they will choose to emulate Martin’s love and compassion for all people.”

To support public art and the work of CT Murals, people can share their work on social media (Instagram or Facebook) or make donations to their progressive work in the community. More projects are in the planning stage in Manchester that will need community support to receive funding, so if you felt inspired and motivated by the ‘Birthing a Legacy’ mural, be sure to voice your support.

To see more of Ben Keller’s artwork and for any inquiries (he is open to commissions) visit www.benkellerart/mergingvisionwithreality.